DIY 250W/4ohm amplifier based on "blameless" topology, and measurements

Hello all, the thread posted at ASR by @sabristol
https://www.audiosciencereview.com/forum/index.php?threads/luxman-l-85v-integrated-amplifier.20657/

inspired me to build a new DIY amplifier functional sample. The circuit posted in the link above is called Luxman L-85 but in fact the topology is rather the Douglas Self's Blameless Amplifier discussed in his book Audio Power Amplifier Design Handbook on also on his website
http://www.douglas-self.com/ampins/dipa/dipa.htm
http://www.douglas-self.com/ampins/dipa/dpafig33.gif

The original Luxman PB-1037 main amplifier circuit is more different with 2 differential stages instead of one, no EF VAS buffer etc. The circuit posted was a temptation to me to get more output current and power and less dependence on load impedance. The main change I made was to use 2 pairs of the output devices, I was thinking about my favorite and robust MJL21194/93 first but then decided to go for MJL3281/1302 pairs, which have even better linearity at high currents and are faster, though only very slightly weaker in SOA.

This is the complete schematics of the amplifier that I built

It was built into my prototype case with two 300VA toroidal transformers, that are needed for the dual-mono , which determined the size of the PCB and also components placement and drilling. The case is 19" 4U, dimensions 450 x 415 x 180 mm. It has big side heatsinks and can accommodate 2x250W amplifier concept with long-term full-power capacity.


This is the amplifier built in the prototype 19" 4U case 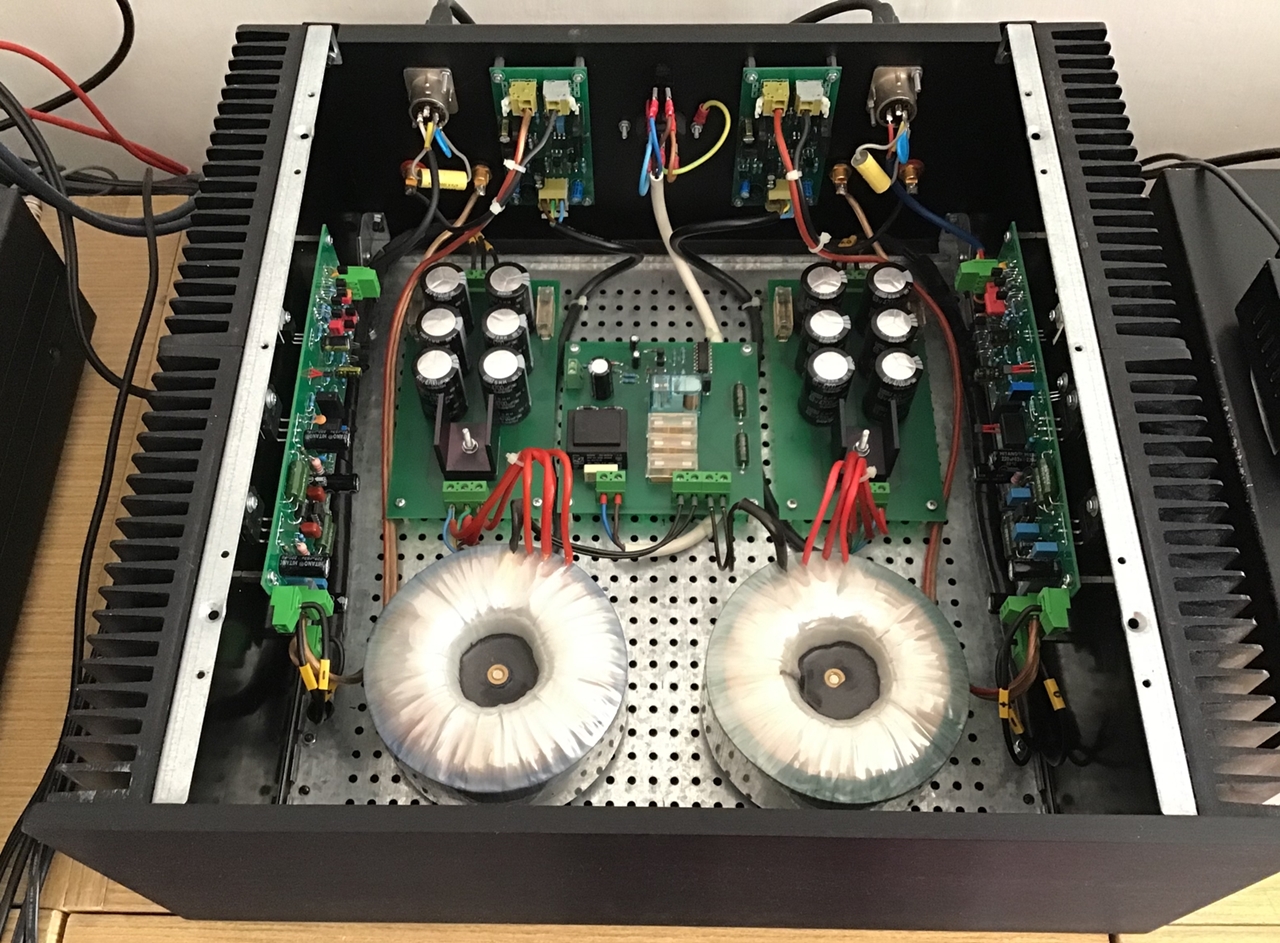 The design is dual mono. There are two transformers, two rectifier-filter boards, two amplifier boards and two DC protection SSR boards inside the case. The metal case is grounded but the signal grounds of the left and right channels are not directly interconnected, they are connected to the case through the Rvar//C components (connected to PE) to prevent usual serious ground-loop hum issues.
Two MJL3281/1302 output pairs make 250W/4ohm power possible with respect to SOA (Safe Operating Area) of the transistors. It is possible to use speaker complex load that does not fall below 4 ohm in its impedance/frequency plot.

The amp may drive purely resistive load of 2 ohm up to full output swing and still stay inside allowed SOA boundaries.

Response to 10kHz square wave into 4ohm in parallel with 47nF 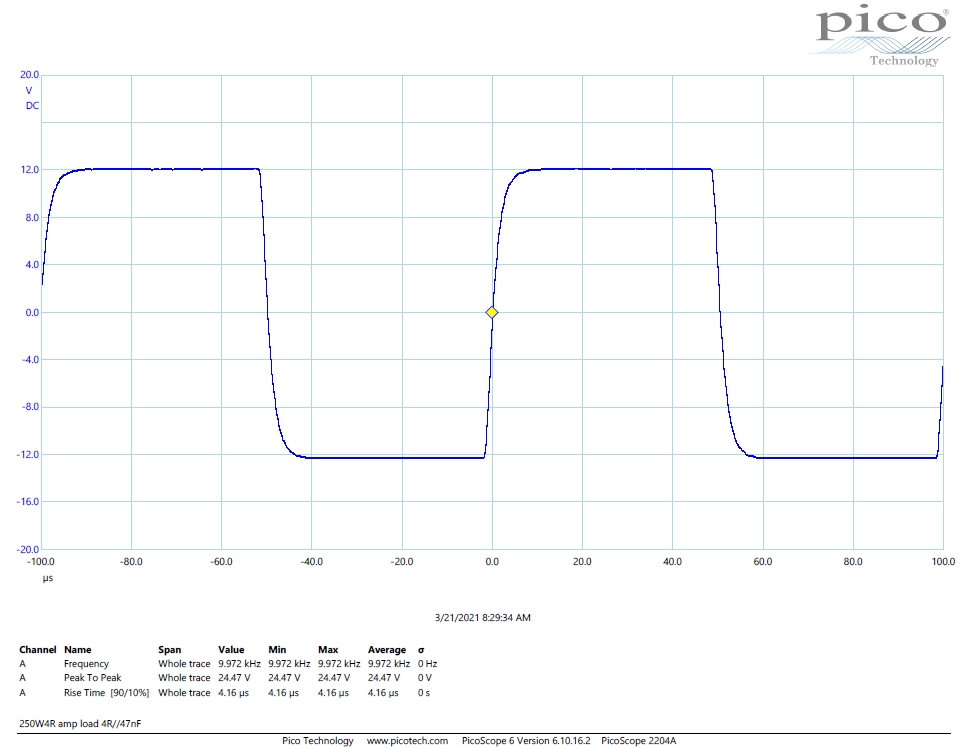 THD and THD+N vs. output power into 4ohm load at 1kHz with measurement bandwidth 16Hz - 22kHz

THD and THD+N vs. output power into 4ohm load at 5kHz with measurement bandwidth 16Hz - 22kHz

THD and THD+N vs. output power into 4ohm load at 20Hz with measurement bandwidth 16Hz - 22kHz 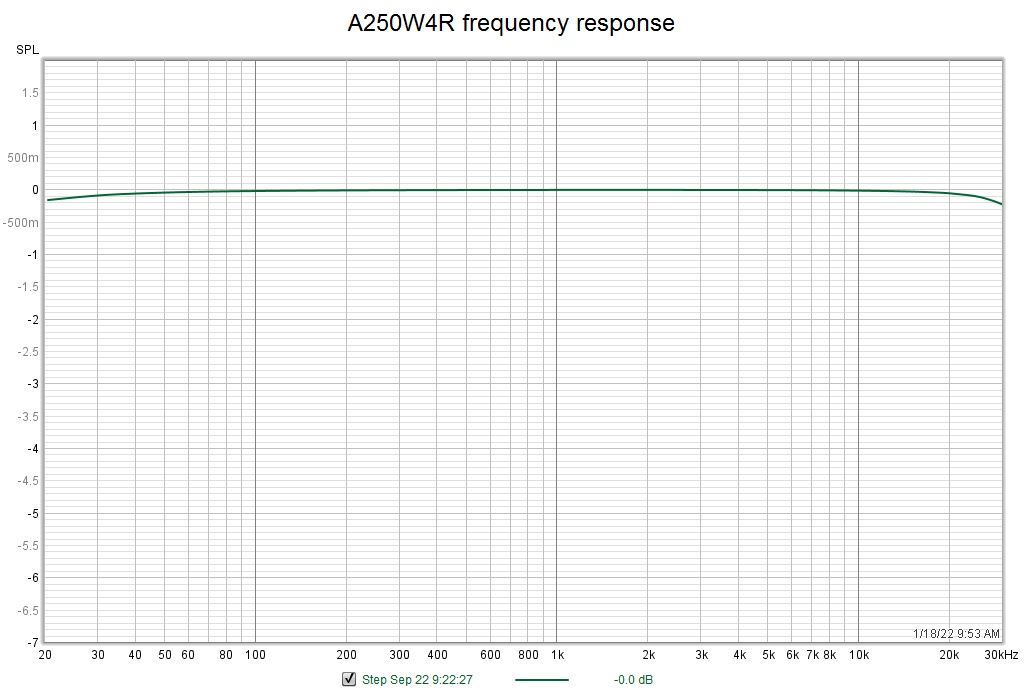